I’ve always used Windows Media Player 11 because it has got awesome library management capabilities.
Yes – it may not be the lightest or the fastest players – but its library is plain, simple, clutter free and very effective.
I got to try out Windows Media Player 11 beta for Windows Xp – for a couple of days now and here are some screenshots.
In short, it is much sleeker, looks a lot better and takes its library management duties more seriously. 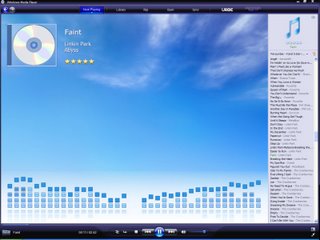 This is the main interface screenshot.
As I said, it is sleeker and more pleasing to the eye.
Different things to notice are the controls in the bottom of the screen and to the bottom left, they have some sort of graphic equalizer display kinda thingy which looks cool.
On top you will notice a button called URGE – which is an online music store that microsoft has tied up with. Something that iTunes is to the iTunes Player. 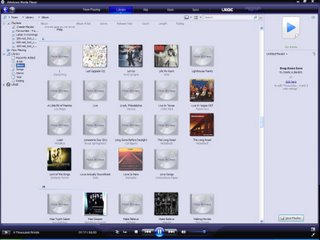 This shows the Albums that I have on the player – it displays any album art very nicely and looks damn nice.
The albums are categorized alphabetically with each letter getting its own group. 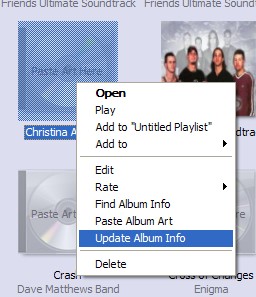 This is one very nifty feature.
You can select an album, right click>Update Album Info and it downloads the album art and album details from the internet and updates the stuff on the fly.
Damn cool. 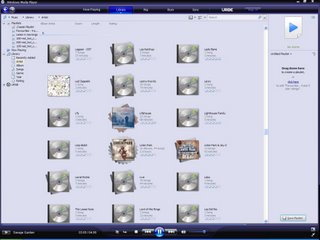 This is another interesting feature – the artiste view shows CDs stacked for artistes having more than one album.
And the number of CDs depicted here equals to the number that actually exist on your PC.
Very nice.
I heard the Vista version allows you to fly through the stack – though I could not manage it on the Xp Version.

And finally this is the mini player which comes onto the taskbar.
Its all black.
Though the installation was smooth – it installs over your Windows Media Player 10 and updates the library – it took a hell lot of time (maybe coz its still Beta)
Also one main feature that its missing is the Auto Playlist feature from Media Player 10.
Hopefully it will make a comeback in the final release which is scheduled for the June 6th.
Surprisingly, the player was just taking 7 MB of RAM in the minimized mode and 13 MB in the full screen mode while playing mp3s.
The beta version was a 23 MB download.
Another first time feature in this release is a “Search as you Type” feature.
Overall, its worth an upgrade if you are a Windows Media Player fan.
By Saurabh Jain
0
Social Networking …
ActiveCiti goes LIVE